Meizu is another brand that is really under rated and not much people know about. They have been here in the Philippines for roughly around a year or two and has lots of devices for sale in Lazada and other physical stores. If you do plan to buy a new entry-mid ranged type of phone at a very affordable price, well I think the Meizu M8 Lite might be the best buy for you. Having 3GBs of RAM and 32GBs of internal storage, this phone is really a bang for the buck.

Interested? Well let’s take a look at the specs sheet of the M8 Lite first:

Looking at the internals of the phone and considering the price it’s at, it’s definitely a must buy if you’re on a budget or if you are looking to buy your kids a phone. Now let’s talk about the specs a little deeper to see what the phone can offer.

So let’s first talk about the display of the phone. The phone is at 5.7 inch at an 18:9 aspect ratio and 282 pixels per inch (ppi). This design type was really famous at the start of 2018 and is still acceptable till now in terms of smartphone design. It maximizes the screen that you can use on the phone considering the aspect ratio and having a ppi of 282 at a screen size of 5.7 makes the color of the screen very good to look at. There are no backlight bleeding visible looking at the sides of the screen and viewing angles are pretty good to say the least. So that’s a plus for us.

If you plan to use the phone outside though, your eyes might have a little bit of trouble looking at the screen in direct sunlight since even putting the brightness at 100% sometimes is not enough. But if you are indoors or under a shade, everything should be visible at around 80% to 90% brightness.

At the price the phone is at, we’d say the camera isn’t all that bad. The main camera sports a 13MP shooter at an aperture of f/2.2. It takes very good pictures outside and in good lighting condition. Indoors especially in low light, noises are visible in the photos but they are still good enough to satisfy most users.

The front camera is a 5 MP shooter and is a weak point of the phone. Pictures taken by the selfie camera is decent although for our taste, it feels under saturated and colors are not vibrant enough. It has a bluish-green hue to it but again, were talking about a phone sub 5k so we can’t really complain much.

The phone is made of polycarbonate plastic with a matte finishing at the back of the phone giving the phone a premium look. Although it’s plastic, it’s not really slippery and I like the grip on the device.

You still have the fingerprint sensor on the back of the device. Buttons on the right side would be the power and volume rockers.

The phone is equipped with a 3200Mah battery which should be enough to last most users for a complete day. Since it only has an HD screen, battery consumption shouldn’t be that high and FlyMe seems to be optimized good enough to make the phone maximize its battery capacity.

One downside though is that the M8 Lite is not equipped with fast charging, so it takes approximately around two hours to two and a half to fully charge the phone.

The phone has a Mediatek MT6739 processor. This is an entry level processor which was released around the end of 2017. It has 3GBs of ram so multitasking should be okay but if you plan to run heavy applications at the same time, it’s going to be the processor that would be having the trouble of keeping them in the background.

The MT6739 is only a quad core processor so handling heavy apps or games would take a toll both on the performance and battery of the phone. Playing MOBAs like Arena of Valor is smooth enough although it should be set to lowest graphics to avoid any stuttering in the frame rate of the game and avoid overheating the phone. If you plan FPS games like PUBG, expect some hiccups here and there even if it’s already at the lowest setting (30fps).

One Lazada happy and satisfied customer, Oliver 2, said that the phone is in its best condition when it arrived. The person who delivered the device even waited for me to open the item to ensure that everything is in place.

As with what we mentioned, most of the cons on the phone comes from the processor they have given it.

For those looking to buy a backup phone or if you are in a tight budget, this is for you. It gives you everything that you need in a smartphone and runs well. But if you have an extra P2,000 or P3,000, I suggest to consider getting the RealMe 3, Redmi Note 7 or Infinix Hot S4.

Many people long for a Chinese brand when it comes to mobile phones. Why? Because Chinese phones have this quality that other brands don’t. Meizu, being one of the most known Chinese electronics manufacturers, have a new product to offer.

The Meizu M6S is a mid-ranged smartphone designed for light users. This smartphone boasts its ability to be flexible and be lightweight. In this article, we will be giving you its key specifications as well as some of the feedback coming from people who were able to purchase it in Lazada PH.

Here are the specifications of the Meizu M6S:

You can purchase this very smartphone in Lazada PH.

Key features of the Meizu M6S

A small smartphone with a lightweight body; it’s very shocking to have a battery that last as long as an iPhone. With a 3, 000mAh battery capacity, you’re sure that this phone can be used all day long.

For gaming purposes, however, it might not be as long as you’re expecting. Its battery is not designed to last that long with many functionalities being used at the same time.

But, if you’ll be using it for phone purposes like regular calling, texting, light browsing and light gaming, then you’re up for a treat.

The Meizu M6S has a fairly standard design and display. Its light weight allows user to operate it on one hand only and the casing is soft and sturdy. It’s more premium and sophisticated-looking than most smartphones in the same category and price range.

Its 18:9 aspect ratio allows the metallic body to have crisp detail and body. The side bezels are absent while the top and bottom bezels are still present. With a wide-screen and high-quality display, it’s possible to fit a larger display in the smartphone while still having a good quality screen and display.

The fingerprint sensor is located at the side like in most Sony smartphones and also has a pressure sensor which can be seen underneath. This allows the smartphone to have the following functionalities:

This is actually one of the first Meizu phones to have a Samsung Exynos processor. The Meizu M6S is equipped with an Exynos 7872 processor with a powerful Soc with Two (2) high-performance cores which run at 2.0GHz while other four (4) cores conserves battery power.

It currently runs at Android 7.0 Nougat which was the actual basis of its operating system, the FlyMe 6 OS. This smartphone has a 3GB RAM and 64GB of built-in storage. It’s expandable via a Micro SD card of up to 128 GB.

Meizu is quiet with the Meizu M6S’ camera. This smartphone comes with a 16MP rear camera with a dual LED flash. In addition to that, it also boasts with an 8MP front “selfie” camera.

If you are a photo enthusiast, then this phone should probably be in your options.

You can purchase this smartphone in Lazada for only P8, 490.00. Many people already took advantage of this big discount that Lazada gives for the Meizu M6S. For you to have a more concrete evidence of what people who ordered thought, here are some of the comments of the people: 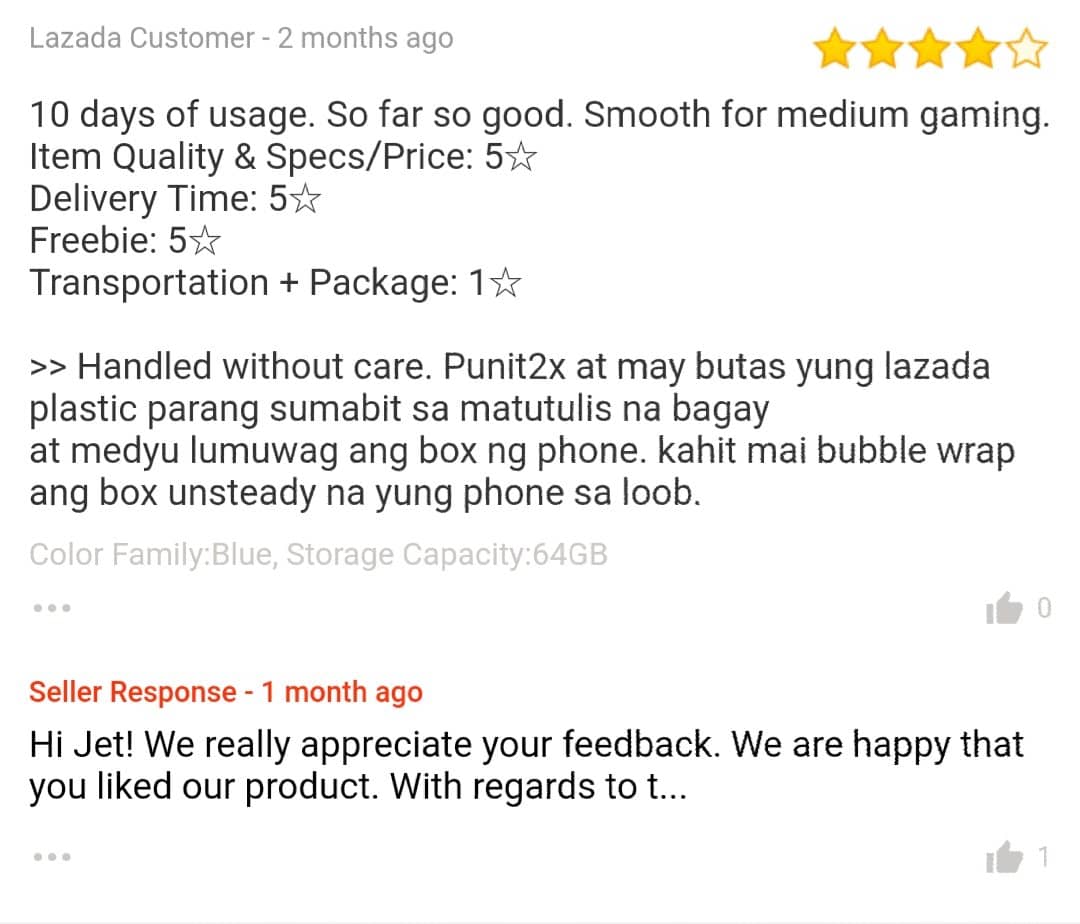 As you can see on the comment of the Lazada user or their feedback, they were astonished with the smartphone and its functionalities. However, their negative comment strictly revolved around the package and the way it was delivered.

As per him, the phone was handled without care:

He said that the phone was not handled correctly. There were holes in the plastic bag and the phone seemed unsteady even if it has bubble wrap inside. 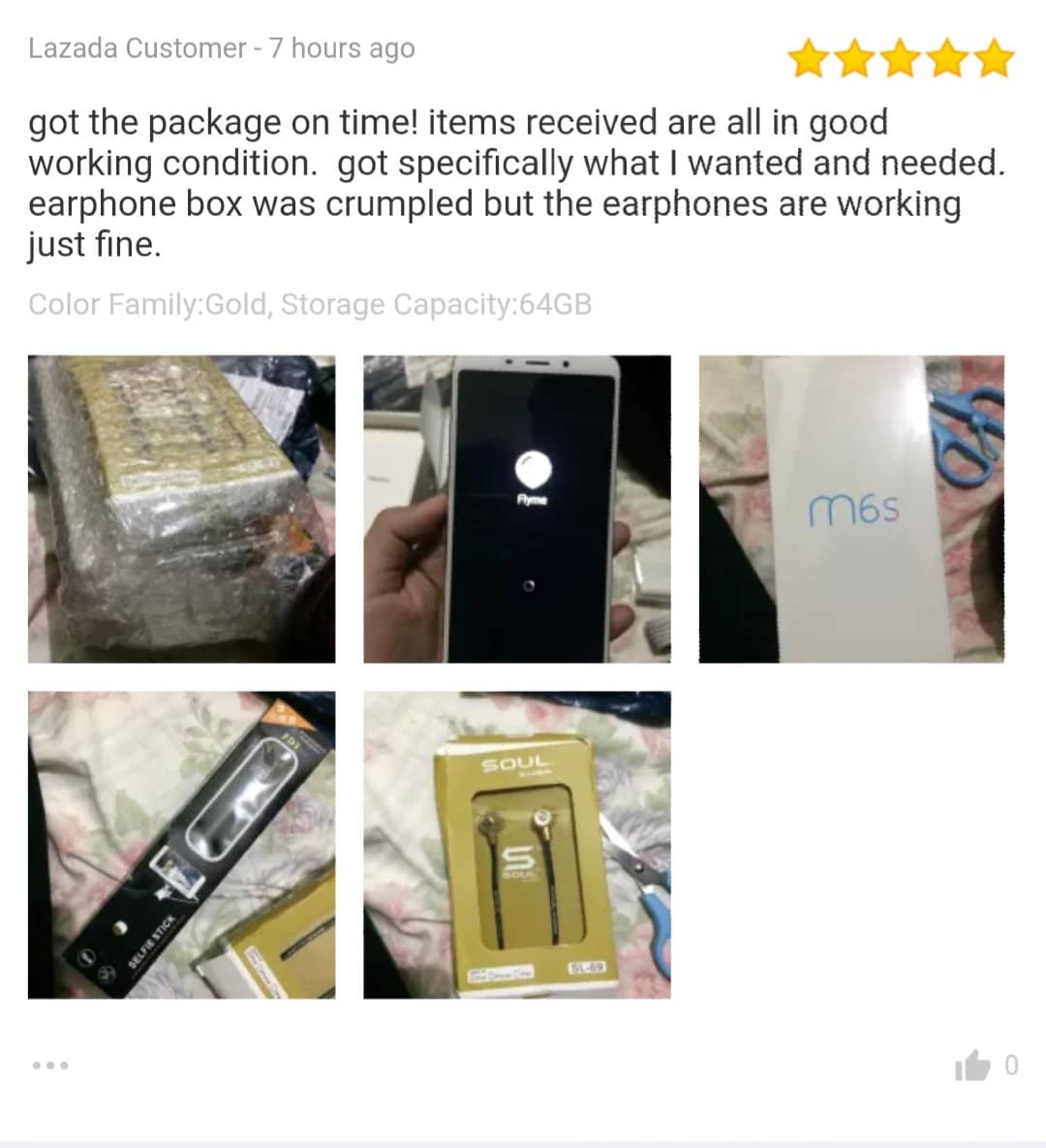 This customer was actually happy with the phone. He even commended the fact that it was delivered on time and that the gadgets were in good condition.

Got the package on time! Items received are all in good working condition. Got specifically what I wanted and needed. Earphone box was crumpled but the earphones are working just fine.

Woops, as per the user, the box of the earphones were crumbled. Nevertheless, they’re still working. 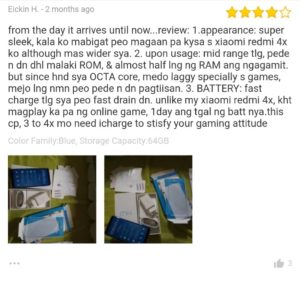 Eickin H, a customer of Lazada, was more than happy with the delivery he got. He emphasizes on the sleekness and the physicality of the smartphone. He also makes a mention of the battery because it charges fast.

So, he says, even though you utilize it for medium-to-heavy games, you can just charge it and achieve a high-battery percentage in a short span of time.

So, if we were to summarize the feedback, two (2) of the comments revolve around the idea that the delivery and/or the packaging was not well-off. However, if we talk about the phone, it’s sleek and is in its best condition.

If you are looking for a cheap smartphone, you can try ordering this from Lazada now! Based on the feedback and the experience of the people who ordered it, they seemed happy and satisfied with their purchases.