Honor, if you aren’t aware, is a sub-brand of the more famous brand, Huawei. We already made a review a while ago on the Honor 9 Lite, which for its price range was a really good device. Now let’s take a look at another device that they recently launched here in the Philippines, the Honor 10 lite.

With the spec sheet given above, this phone is looking really good for its price point. I mean you can even consider this phone as the Huawei Nova 3i’s little brother since they have the same processor, the Kirin 710.

Now let’s go through with what we think of the device. Don’t worry, we didn’t just collect information from users of the phone, but we also have a unit ourselves.

First let’s talk about the main camera. Similar with new phones coming out of the market, the honor 10 lite sports a dual-lens system which is perfect for capturing portrait shots.  It has a 13MP main camera lens and a 2MP depth sensor which gives off that nice bokeh effect for portrait shots.

Moving over to the front camera, it carries a 24MP camera which is really good for taking selfies. If you aren’t aware, the honor 10 lite was marketed specifically as a selfie eccentric phone, and it really does take good selfies.

Coupled with good cameras, the honor 10 lite packs a lot of camera features as well. You can enable AI photography, which automatically detects what type of picture you are trying to take. It can go from sceneries, to portrait, to food and even plants.

AR stickers are also available if you feel like having some quick fun with its camera.

For super low-light photography, you can’t really expect too much for its price range but it’s still good enough to satisfy our needs. You can also enable night mode on this phone which converts very dark pictures to lighter ones since it needs you to hold the phone for a couple of seconds and it will automatically pick the best exposure and lighting for the image being taken.

The overall design of the Honor 10 lite is really great. The back is made of plastic but it doesn’t look cheap at all. They added that glossy finish to back so that when light hits it, it reflects over the light and give of a really shiny look. Although one thing to take note is that since it’s made of plastic, fingerprints easily stick to the backside, so might want to use the free case included when you buy the phone.

The sides are made of metal and the power button is found on the upper right side of the phone.  Overall build, it feels really sturdy.

It sports a FHD display, with a PPI (pixels per inch) density of 415. It also sports the new waterdrop display which gives you more screen to use on the phone and a better screen to body ratio. Compared to the notch that we see in phones like the Nova 3i, Pocofone etc., the waterdrop notch is a much better design and gives you that feeling that it maximizes the screen on the phone.

If you were to go outside under direct sunlight, the screen is still viewable. I’d say putting the brightness to around 80% to 90% would be the best to be able to read things on your phone.

As we said, it has a Full HD display but one good thing about EMUI is that it gives its user the capability of setting the screen resolution over to HD+ to be able to conserve battery.

We have made some test here and there on the phone and it was able to keep up with apps that we use on a daily basis. So if you’re planning to use the phone as a daily driver, it would definitely suit your needs. As we said earlier, it packs the Kirin 710 and a GPU of Mali-G51, the same one that the Nova 3i hasso it should be at par with it. The only difference is the RAM, so multitasking would be better on the 3i.

In terms of gaming, we have tested a few MOBA games on the phone and we were able to play them at full graphics and 60 fps with little to no frame drops. But with this settings, a little heating should be expected, so we suggest putting the graphic settings to around medium to conserve battery life as well.

We also tried PUBG, a graphics heavy game. It runs pretty smooth. You can put it to a max of 60 FPS and HDR graphics but expect lots of frame drops. If you set it over to balanced, expect a consistent 30 fps with little to no frame drops.

The device is packed with a 3,400 mah battery. It can last you the whole day for casual use like calling, texting and taking [pictures from time to time but if you plan to use the phone for gaming or browsing sns, you might want to bring a powerbank with you since it might last you about an average of 5-6 hours for medium to heavy use.

Here comes the good part. As we know, the Honor 10 Lite is being sold in Lazada, Shopee and some physical stores and those who buy the phone are bound to give feedbacks on it especially if they buy it online. Taking a look at the product on both Lazada and Shopee, those who have already both the device seems to be really happy and satisfied for their good buy.

Taking a look at the reviews on Lazada, not a lot of reviews are posted but almost everyone is satisfied. Out of 5, the phone has a rating of 4.9. Customers were really happy on how good the phone is. Delivery wise, they were also saying that most of them got the phone within a day or two. And more thing that they are extremely happy about are the freebies. Currently if you but the 32GBs variant, you’ll be able to get an Honor Band 4 smartwatch, Honor headphones, Tumbler, Sports Armband, Luggage Bag, and a Ringstand which should total out to around P1, 000.00 pesos worth of freebies. 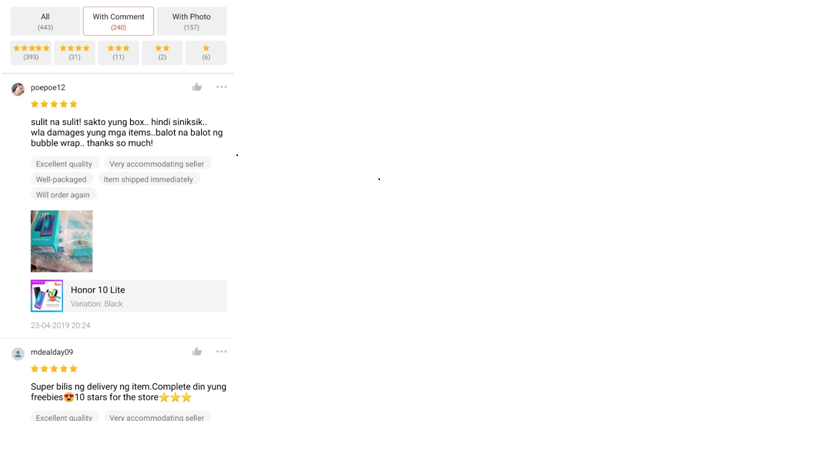 The same goes to Shopee’s customers. The phone currently has a rating of 4.8 and around 442 people had rated the product. Delivery time was great as well for the most of them and they, too were really happy since they have gotten the same freebies as well.

The Honor 10 lite for its price to performance cost is absolutely a bang for the buck. It’s an overall good phone. From pictures to gaming, it can live up to your expectation and you definitely won’t be disappointed.